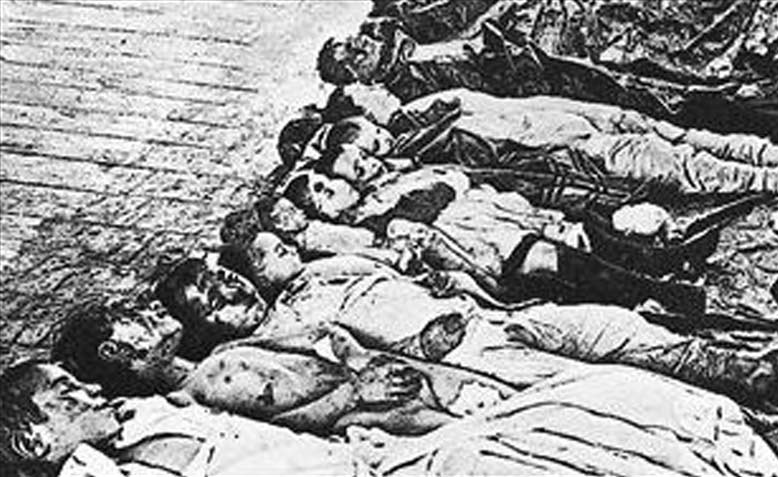 The results of a pogrom in Ekaterinoslav 1905. Note the dead are mainly children. Source: Wikipedia

The revolution that smashed the tsarist state, liberated Jews from centuries of oppression writes John Westmoreland

Imagine if we could time-travel backwards to Europe 1900 so that we could warn European Jews that within fifty years there would be a Holocaust, an attempt to completely wipe out the entire population of Jews in Europe. The assumption would almost certainly be that the Russians would be responsible. While racial, and potentially murderous antisemitism was clearly visible in Europe, particularly among the Pan-Germanic right, and the nationalist right in France, the actual mass killing of Jews was a mainly Russian crime in the nineteenth century.

When the Russian tsar Alexander II was assassinated in 1881, it was discovered that one of the assassins was a Jew. A wave of murderous attacks on Jews (pogroms) erupted. The pogroms were interpreted as a demonstration of love for the tsar and hatred of his enemies. Pogroms thus became a method of promoting Russian patriotism.

Russian nationalism was somewhat different to its counterpart in Western Europe. In place of a Liberal notion of citizenship and formal equality before the law, as had emerged in France and Britain, Russian nationalism was built around the institution of tsarism. The tsar was the nation, and patriotism was devotion to the tsar.

Alexander III, more brutal and tyrannical than his father, and consequently fearful of revolution, declared war on the political reform his father’s killers had hoped for. The archaic Russian state would press forward based on the most brutal repression. As Jews in Western Europe had benefited from the emergence of the modern capitalist state – gaining equal rights and, for some, gaining prominence in the modern professions – Jews were feared and distrusted in Russia. Jews were seen as belonging to a nation of their own. They were more literate, more economically successful and shared greater social solidarity than the Russian peasants in their millions. As a result, in 1882, a raft of anti-Jewish laws (the May Laws) were passed.

The May Laws attempted to lock the Jewish population into the cities by forbidding their emigration to the countryside. Rural Jewish property was often confiscated. Jews living in the north were pushed back to the area known as the Pale of Settlement in the south of the empire. Jews were to be rigorously policed as an internal enemy. The antisemitism promoted by the Russian Orthodox Church was already there among the peasants and some workers, but it was formalised and given legal encouragement by the tsar and his ministers.

Pogroms were organised with the purpose of empowering the non-Jewish victims of Russian autocracy against a helpless scapegoat. Towns with a Jewish population were selected and then the machinery of the Russian state swung into action.

Trotsky’s description is confirmed by many other reports:

“A patriotic procession starts out, with the clergy in the front, with a portrait of the Tsar taken from police headquarters, with many national flags. A military band plays without cease. At the sides and at the rear of the procession march the police…The band never stops playing God Save the Tsar, that hymn of the pogroms.”

For three days the excited crowds were allowed by decree to do anything they wanted to the Jews:

“The doss-house tramp is king. A trembling slave an hour ago, hounded by police and starvation, he now feels himself an unlimited despot…There exist no tortures, figments of a feverish brain maddened by alcohol and fury, at which he need ever stop. He is capable of anything, he dares everything. God save the Tsar!”

The pogroms did not usually happen as random acts. The pogroms occurred when tsarist rule was threatened. Pogroms were frequent in Ukraine where vast reserves of coal and iron ore drew in Russian workers to mine the ores. As economic depression hit the living standards of workers In the 1890s attacks on the Jews intensified.

Clearly the government was increasingly concerned by the growth of the Russian revolutionary movement and the spread of illegal revolutionary literature. Revolution would break out amid the disastrous circumstances of the Russo-Japanese war in 1905, which in turn marked a turning point in the fortunes of Russia’s Jews.

The methods of encouraging antisemitism were changing too. Revolutionary appeals to the working class were now countered by propaganda. The most infamous propaganda tool of the regime was the circulation of a tract entitled The Protocols of the Learned Elders of Zion.

The Protocols were an invention of an international Jewish conspiracy, first published in Russia in 1903. They consisted of forged Jewish documents. The Protocols were supposed to be the secret means by which the Jews would take over the world.

It suggested an international scheme where Jews would use their advantages to destroy whole countries. ‘Finance Jews’ such as the Rothschilds banking family would ensnare governments in debt, while Jews well placed in state bureaucracies, the press and the emerging revolutionary movement would incite the population against politicians and the Christian church.

The Protocols were seized on by right wing fanatics across Europe. As the competition for empire, which would erupt as World War in 1914, brought European states ever closer to conflict, the value of having an internal enemy was immense.

The ruling class wanted to draw together the exploited workers, the small trader threatened by big business, the reactionary clergy dismayed by the decline of organised religion and the alienated peasant. Antisemitism was extremely useful. The Protocols invented an international Jewish threat, with economic, political and cultural malevolence and it preached racial violence as a cleansing force.

However, racist scapegoating only works when other, more constructive solutions are absent. 1905 was a major turning point in the fortunes of Russia’s Jews. The stereotype of the Jew as an international, cultural and political threat promoted by the Protocols found at least some resonance in the personality of the leading revolutionary figure of 1905.

Leon Trotsky was a Jew from the Ukraine. His father was wealthy. He was well educated to the point where even his enemies conceded his brilliance. He was certainly an internationalist, and a crafty plotter who would happily bring about the destruction of the entire capitalist order given the chance. The analogy has its limits though. Trotsky declared himself Russian rather than Jewish and loyal to the workers’ movement rather than Judaism.

It is nevertheless quite astonishing that the workers of St Petersburg, at the height of the revolution, elected Trotsky as President of the St Petersburg Soviet. It is at once a statement of revolutionary intention and a rejection of the politics of hate.

By 1905 the working class in Russia was aware that hatred of the Jews was being promoted to forestall revolution. The following passage by Trotsky is worth quoting in full:

“No pogrom took place in Petersburg…All plants and workshops having any access to iron or steel began, on their own initiative, to manufacture side-arms. Several thousand hammers were forging daggers, pikes, wire whips and knuckledusters. In the evening, at a meeting of the Soviet, one deputy after another mounted the rostrum, raising their weapons high above their heads and transmitting their electors’ solemn undertaking to suppress the pogrom as soon as it flared up. That demonstration alone was bound to paralyze all initiative among rank-and-file pogromists.”

Trotsky summed up the significance of this in one sentence:

Between 1905 and 1917 the number of pogroms decreased. In part this was because after the defeat of 1905 the ruling class used massive repression against the revolutionary forces, but it also signifies the limits of antisemitic scapegoating for the government. Workers understood that racism was a tool of counter-revolution – one more barbaric aspect of a hated regime.

In 1917 the revolution emancipated Russia’s Jews. The Provisional government dispensed with the May Laws once and for all. By 1917 there were over 600 laws affecting Jewish existence in Russia. The revolution swept these away.

In 1918 the Bolshevik government passed the law that separated church and state. This act emancipated all the national churches which had been persecuted by the Russian state with the complicity of the Russian Orthodox Church.

Russia had now achieved religious freedom. For Jews the nightmare of state-sponsored pogroms was over. However, outbreaks of violence against Jews was still a feature of life in the Ukraine until the end of the Civil War in 1921, and clearly tsarist antisemitism had sunk deep roots among Ukrainian peasants. Antisemitic propaganda was prominent in the White army’s campaigns as the following poster White army poster depicting Trotsky as a Jewish monster shows.

However, there is a further reckoning to be made concerning antisemitism and the Russian Revolution. The blood of Jews that was spilled in the Russian empire was overwhelmingly the responsibility of the tsar and his ministers.

Those who claim that the rank and file pogromists were equally culpable miss the crucial point. In 1917 the Russian masses were armed and free of the tsar’s yoke after the February revolution. In all the Russian centres of the revolution violence was overwhelmingly defensive and directed against the forces of the tsar.

The opportunity to turn against the Jews was not taken. Furthermore, once again many Jews were elected to prominent positions in the Soviet state, with Trotsky in the supreme role of leading the Red Army.

Jews were slaughtered by the tsarist White armies. Jews were blamed once again for the revolution and the death of the tsar. With the defeat of the White armies in 1921, and the settling down into some form of ordered existence Russia’s Jews were experiencing their best times on Russian territory.

The Russian Revolution, largely because of the devastating effects of war in its first years, did not accomplish its aims. In particular the revolution did not spread to Germany, and the rise of Stalin and the bureaucracy stifled the spirit of 1917, twisting the revolutionary fervour of 1917 into the nationalist treadmill of enforced industrialisation.

The truth is that the western imperialist powers won the war and broke the revolution. And the Jews in the west were persecuted anew by a ruling class that had been frightened to its core by workers taking power.

The arch imperialist Winston Churchill, who had dedicated £100 million to the counter-revolutionary White armies, ridiculed the revolution as ‘Bolshevik baboonery’ and added that ‘the Jews have got the Russian people by the hair’. Murderous antisemitism left Russian soil to take firmer roots in Nazi Germany, while the liberal establishment looked the other way.

The defeat of the revolution led directly to an imperialist peace in the west, which in turn led to Hitler, World War Two, and the Holocaust. For Russia’s Jews the trite summary of events offered by establishment historians today that the revolution was doomed because communism is an idealistic fantasy, is as foolish as it is cruel.

The revolution smashed the tsarist state and liberated Jews from centuries of oppression. It smashed the state that murdered thousands of Jews and proved that oppression can be fought. It was the defeat of the revolution in Russia that led directly to the rise of Hitler. Hitler’s gas chambers are the real monument to the crushing of the revolution. In our post-Holocaust world, the liberal establishment needs to wear that fact as an eternal badge of shame.